Building the first
predictive model
for the Galactic ecosystem !

Get Started Our Research
State of the art
Observations and theory : from galaxies to protoplanetary disks

Modern astronomy reveals that our Universe started out extremely simple. It was almost perfectly uniform with only very small density fluctuations. Today, we live in a different world. More than 13 billion years after the big bang the Universe is deeply organized on all scales, ranging from large galaxy clusters to stars and planets and down to the level of complex organic molecules. In this hierarchy of comic structure, galaxies and the stars and planets they harbor within, are fundamental building blocks. Understanding their origin and the physical processes that govern their dynamical evolution is one of the key challenges in modern science.

Indeed, we currently witness a paradigm shift in this field of research. While previous models assume the Milky Way and the structures within typically persist in equilibrium and only slowly evolve over secular timescales, we now know that the evolution of the interstellar medium (ISM) and the formation of stars and planets is a highly dynamical process, which couples a wide range of scales in space, time, and energy through a large number of different feedback loops. We now understand that a comprehensive model of our Galaxy will need to consider it as one single complex ecosystem, where large parts evolve far from equilibrium and which exhibits highly non-linear dynamical behavior. It requires a statistical approach together with a complete inventory of the different Galactic environments and knowledge of their possible variations across all scales.

It  is well established that a complex cycle of matter and energy takes place within galaxies. The complex flow patterns in the multi-scale multi-phase ISM are the central engine of galaxy evolution, they determine where and at what rate stars and planets form in our Milky Way. Stars build up in regions of the ISM that become unstable under their own weight. During this contraction, the density increases by more than 25 orders of magnitude and the temperature rises by a factor of a million. The process comes to an end when nuclear burning processes set in and provide stability: a star is born. Star formation is controlled by the intricate interplay between the self-gravity of the ISM and various opposing agents, such as supersonic turbulence, magnetic fields, radiation and gas pressure. The evolution is modified by the thermodynamic response of the gas, which is determined by the balance between heating and cooling, which in turn depends on the chemical composition of the material and the detailed interaction of gas and dust with the interstellar radiation field. 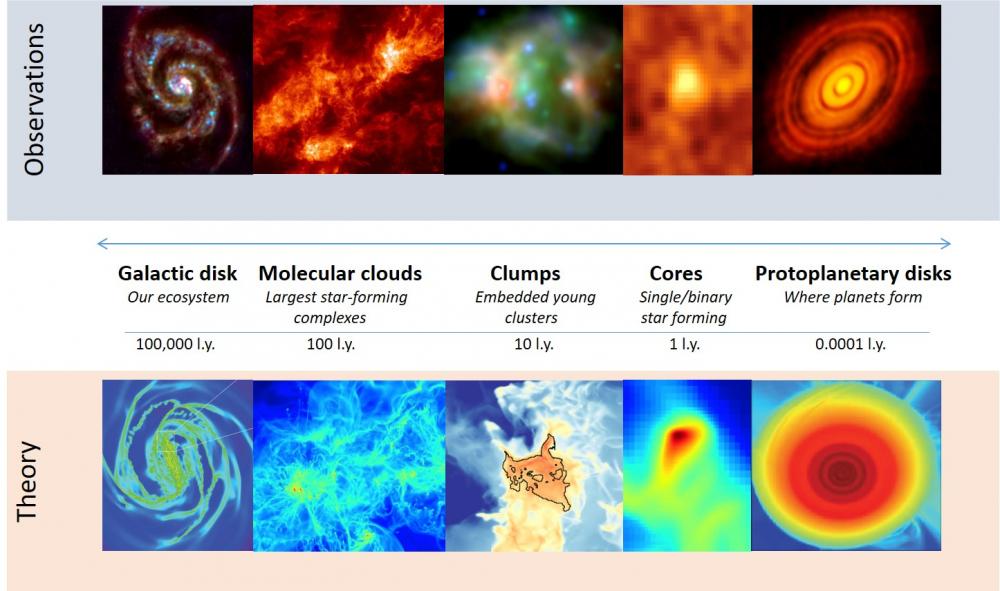 A wealth of observational data is available now to study molecular clouds and their fundamental properties, such as their mass, velocity dispersion, and chemical make-up. Still, it is not clear how long these clouds live, when and how they disperse, and what fraction of their mass is converted into stars. Clearly, the answer will depend on where we look in the Galaxy. While the existing surveys still require a more sophisticated analysis, a major leap for-ward is coming with new data from the Gaia astrometric satellite. Accurate positions and distance measurements of about one billion stars will allow us, for the first time, to obtain a full 3D view of the distribution of stars and gas in the Milky Way. This will revolutionize our under-standing of the Galactic cloud population. By a similar token, numerical simulations of full galactic disks have become available in the past decade. These have been used to generate populations of model clouds, however, the approach is still limited by insufficient spatial resolution or by the small number of physical processes considered. Modern adaptive mesh refinement techniques improve this situation, but so far only few regions have been studied. We will go beyond the current state-of-the-art by combining novel zoom-in techniques with global disk simulations. The initial and boundary conditions are taken from the best datasets for the Milky Way, and so these models will have the highest degree of reality possible. Our goal is to build a large database of simulated molecular clouds in different Galactic environments with very high resolution and unprecedented physical fidelity, and to produce synthetic observations for the one-to-one comparison with astronomical data. Given the complexity of the data and the simulations, finding the proper metric for this correlation is a major challenge in itself. Therefore, quantifying to what extent numerical models and observations agree or disagree is a crucial open question. A major strength of ECOGAL is our experience in modern machine learning methods, which we will coherently apply to observational and numerical data alike.

While it has long been recognized that most stars form in clusters, it is not well understood how stellar clusters get assembled. The most promising scenario, at least for clusters of thousands of solar masses, is that they form through the collapse of a massive gaseous clump, in the deep interior of molecular clouds. Thanks to advances of observational techniques, we now understand the basic parameters of proto-cluster clumps. Due to the lack of spatial resolution, however, our current knowledge of their internal spatial structure remains still coarse. This is a severe limitation, because correlating the gas distribution with the morphology of the resulting stellar cluster is a fundamental step on the path towards a deeper understanding of how stars form and how this process influences the properties of accretion disks. The ALMA interferometric sub-millimeter telescope has dramatically improved this situation, as it allows us to study this critical phase of evolution with about 100 times higher resolution than previously possible. This progress in observational capacity is mirrored by recent advances in theory. Analytic studies and numerical simulations indicate that the proto-cluster gas is heavily influenced by initial conditions and the dynamics of the parental cloud. It is also possible now to include key stellar feedback processes in the simulations. However, there is no systematic investigation of the combined role of the proto-cluster environment and of the impact of all feedback processes acting in concert. Understanding the evolutionary sequence of how gas turns into stars remains a major unsolved question. By zooming in from molecular cloud simulations including all relevant forms of stellar feedback, we will for the first time at this resolution, follow the entire formation process of stellar clusters self-consistently.

On the next level of the hierarchy of scales, prestellar cores constitute the local reservoir of gas and dust that feeds individual stars. Recent observations with the Herschel satellite indicate that the core mass function (CMF) has a shape very similar to the stellar initial mass function (IMF). An important question therefore arises as to whether the IMF is inherited from the CMF. Since the stellar mass function plays a determining role in many fields of astrophysics, clarifying this question is important. As part of an accepted ALMA large program, led by one team member, we will address it in denser and more massive clouds. These are more representative of the typical environment in which stars in the Galaxy form, than the small clouds for which this the correlation has been reported. We have recently performed a multi-scale simulation that covers five decades of spatial scales and that leads to a CMF that is comparable to the observed one. While this is encouraging, stellar feedback was not considered and only one large-scale environment has been investigated. In ECOGAL, we will significantly go beyond the current state of affairs by including different forms of stellar feedback and by investigating a wide range of different environmental conditions. Our results will be directly compared with data from ALMA and NOEMA in the southern and norther hemispheres.

Planet forming disks are the immediate progenitors of planetary systems and determine their characteristic properties. It is now well established that disks form early in the star and planet formation process, and then last for several million years. Getting a complete history of the temporal evolution of disks and a comprehensive overview of their key parameters is a critical challenge for modern astrophysics. For the late states of disk evolution there are systematic surveys in nearby clouds, but during the critical initial phase, it is observationally challenging to disentangle early disks from their gaseous envelopes, and so only few observations are currently available. Another fundamental and complementary aspect is to understand what physical process controls the formation and size of disks. Is it the magnetic field, or the angular momentum distribution of the parental core, or maybe some other mechanism? We will address these problems with a new observational survey of disks in massive clouds that also probe properties of the magnetic field. On the theory side, most studies so far have considered disks in isolation. However, we know now that the environment plays a key role. Taking advantage of the cluster simulations in ECOGAL, we will pursue a suite of deep zoom-in calculations with the appropriate environmental conditions that will result in a complete population of accretion disks together with their time evolution. The comparison with our observational survey data, allows us to predict the distribution of planet-forming disks in the Galaxy. We will use these disk calculations as input for ‘effective models’ of planet formation, building up a synthetic population of planets for the model star clusters.

We stress that a comprehensive understanding of our Galactic ecosystem requires us to link an outer scale of ~30 kpc, the size of the entire Milky Way of about 100,000 lightyears across, to an inner scale of ~1 AU, Earth’s orbit within planet-forming disks. Approaches that treat the constituents of the Galaxy in equilibrium and consider the various scales in isolation have reached clear limits. To go beyond the current state of the art, and build a unifying predictive model of ISM dynamics and star and planet formation in the Milky Way, we need to self-consistently follow the cascade of spatial and temporal scales and feedback loops in both directions (Figure 1). And we need to obtain a complete inventory of the conditions conducive to the birth of stars and planets in the Galaxy. It is currently impossible to bridge the enormous range of scales involved in a single observation or to resolve all these processes in one single numerical simulation. And so a concerted, multi-faceted approach is needed, combining input and information from different scales and object classes to see the emergence of a coherent picture, like a mosaic consisting of many individual pieces.